Technology has changed the way we communicate, the way we shop, and the way to connect to the world. We can access the internet on the go with our smartphones, we can talk to friends and family and see their faces even when they were thousands of miles away by using video conferencing software and social media websites, and we have a computer “on the go” with our tablets and we can even wear our technology as glasses and watches!
People always ask “what will they think of next?” It’s not always about what will be created next, but we need to think about who will design and create them.

For our technology to keep progressing we need to encourage our future generations to be our up and coming digital pioneers! To be able to grow our computer scientists of the future we need to plant the seed of computational thinking as early as possible.
There are many resources available to introduce our children to the ever-expanding world of computer science. Here are a few useful links which will help you introduce your classes to computing and computational thinking in a fun and interacting way.

Fix the Factory is a free app available for apple and android devises. The aim of the task is to give instructions to the robot to navigate him around the maze working around obstacles and facing different challenges as the levels progress. The user is rewarded points for things like writing the least amount of moves for the robot to do – it’s about writing precise code and giving clear instructions.

Hopscotch is a free available for apple devises. In 2013 it won the parents’ choice golden award and in 2014 won the Children’s Technology Review: Best Educational Technology award. The app doesn’t just teach you how to code, it also teaches problem solving and critical thinking – important skills that are used throughout life and in all career paths.

Daisy the Dinosaur app aims to teach the basics of computer science by giving Daisy (the dinosaur) a set of instructions to follow. The free app is available on apple devises and uses a fun, colourful interface where the user drags and drops  commands for Daisy to do. The user learns the idea of sequencing, loops and events as they solve the challenges.

Cargo-Bot is a free apple devise app where the user writes instructions to move the robotic crane to pick up and drop off crates. The user is introduced to the idea of loops and events and touches upon the idea of if statements.

Let your imagination run wild with Scratch. Scratch has a downloadable version as well as a web based version and is available for Mac and PC. The user is given a blank canvas with create a 2D game. They can either create their own characters or use the library provided. The user builds up commands to get characters moving, implement loops, and understand events/broadcasts. Click here to see an example of a game.

Rather than just playing Xbox games, you can now develop you’re own games using Kodu. Kodu is a free piece of software for PC and is also available as an Xbox 360 Indie Game. The user is introduced to the world of computer science as they develop their very own 3D game.

http://www.code.org is a website offers support for everyone. The website allows you to make and share your own Flappy Bird game, get to grips with loops and events as you program familiar characters through a maze. 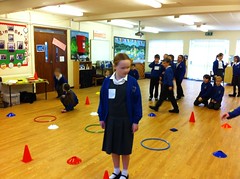